There are several examples of unused gameplay or graphical material within most Ao Oni versions. Sometimes, these materials are present in one version, but removed within the next.

There exists a number of unused graphical materials in Ao Oni. These unused sprites often suggest an unfinished portion of the game that was cut out, or a variation certain points in gameplay. Some of the unused assets appear to predate even version 1.1, due to Ryota appearing in them. suggesting that they possibly could've been used in very early stages of development.

An unused sprite of the oni showing it carrying the rope ladder. This is the only finished frame of the sprite.

An unused sprite showing the oni leaving the well after the second ladder has been placed, relating to the fact it tries to climb up after the party at the end of Version 1.1. This could be unused because the Oni is too small in this graphic.

Unused doors, which appear similar to the doors on the second floor in Version 3.0 and the door that the oni's shadow passes across in all versions.

Unused sprites for a drowned Ryota, except out of the water and bathtub.

All of the unused part of Ryota Drowned, it seems that at the top, there is an injured Ryota injured, below Ryota Drowned used in Version 1, and below, an undead Ryota, injured/drowned Ryotas out of the bath. 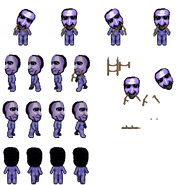 The entire first photo of the galery, as seen, there's only one frame of moving oni with rope ladder.

Hiroshi encountering the corpse of Ryota. The unused sprites are seen here.

A small number of audio tracks and sound effects exist in Ao Oni games. Most of these are simply Files from previous versions carried over to newer ones, but Version 1.1 had two unused audio tracks.

The sound effect, "bikkuri.wav," is used only in Version 1.1 when the player discovers Ryota's dead body in the bathtub, but in future versions it was removed. The sound was taken from the visual novel Higurashi no Naku Koro Ni, which is in some ways similar to Ao Oni.

Not many things exist in Ao Oni's files that are unused, at least in the field of gameplay. An obvious unused portion is the fact that the characters have all had HP (Hit Points) and MP (Magic Points) since Version 1.1. This is because the game was created in RPG Maker XP, hence all characters have RPG stats. In Version 1.1 to Version 3.0, the menu screen also had such options as "Skills," "Equip" and "Status" which were removed in later versions.

One gameplay mechanic used in Version 1.1, that was taken out in later versions, is the amount of damage that will pop-up whenever the oni touches the player. This is due to the "battler_attachment" script which sets the function "self.battler.damage_pop" to "true" in Version 1.1. In future versions, it is set to "false."

Also in Version 1.1, there is one item in the game's data that was never used, the scissors (はさみ, hasami?). It seems the player would find this item after Kazuya attaches the rope ladder to climb down into the underground tunnel, and during the time where Hiroshi and Megumi is heading toward the exit. The scissors were used to cut down the ladder in the final segment of the game. However, it was never implemented.

Community content is available under CC-BY-SA unless otherwise noted.
Advertisement